The Vank Cathedral was one of the first churches to be established in the city’s Jolfa district in 1606 by the hundreds of thousands of Armenian deportees that were resettled by Shah Abbas I during the Ottoman War of 1603-1618. The varying fortunes and independence of this suburb across the Zayanderud and its eclectic mix of European missionaries, mercenaries and travelers can be traced almost chronologically in the cathedral’s combination of building styles and contrasts in its external and internal architectural treatment.

Construction is believed to have begun in 1606 by the first arrivals, and completed with major alterations to design between 1655 and 1664 under the supervision of Archbishop David. The cathedral consists of a domed sanctuary, much like a Persian mosque, but with the significant addition of a semi-octagonal apse and raised chancel usually seen in western churches. The cathedral’s exteriors are in relatively modern brickwork and are exceptionally plain compared to its elaborately decorated interior.

The interior is covered with fine frescos and gilded carvings and includes a wainscot of rich tile work. The delicately blue and gold painted central dome depicts the Biblical story of creation of the world and man’s expulsion from Eden. Pendentives throughout the church are painted with a distinctly Armenian motif of a cherub’s head surrounded by folded wings. The ceiling above the entrance is painted with delicate floral motifs in the style of Persian miniature. Two sections, or bands, of murals run around the interior walls: the top section depicts events from the life of Jesus, while the bottom section depicts tortures inflicted upon Armenian martyrs by the Ottoman Empire.

The courtyard contains a large freestanding belfry towering over the graves of both Orthodox and Protestant Christians. A tile work plaque inscribed in Armenian can be seen by the entrance to the cathedral; graves are also placed along the exterior wall before the entrance, with inscriptions in Armenian. In one corner of the courtyard is a raised area with a memorial to the 1915 Armenian Genocide in Turkey. Across the courtyard and facing the cathedral is a building housing a library and museum; outside of this building are several carved stones showing scenes from the Bible. 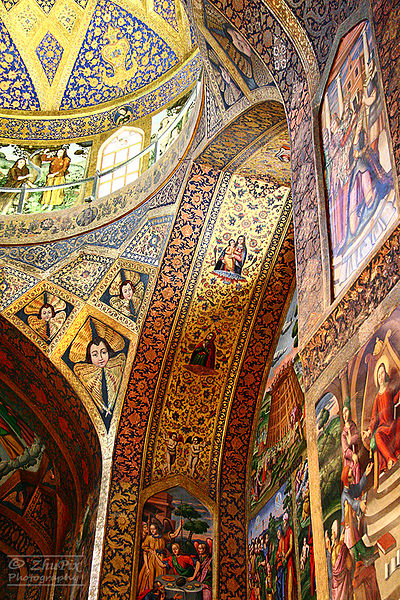 The interior view of the Vank Cathedral.

The library contains over 700 handwritten books and many invaluable and unique resources for research in Armenian and medieval European languages and arts. The museum displays numerous artifacts from the history of the cathedral and the Armenian community in Isfahan, including:

The cathedral has greatly influenced the architecture and decorative treatment of many subsequent and smaller Orthodox churches in the entire Persian-Mesopotamian region. 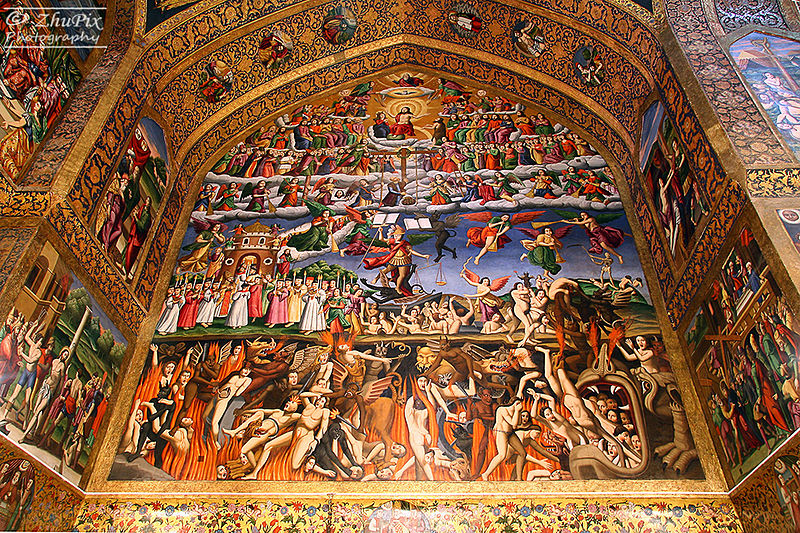 An Armenian fresco depicting Heaven, Earth, and Hell at the Vank Cathedral 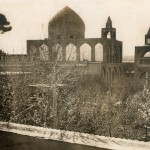 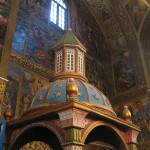 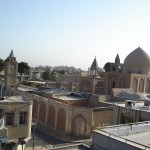 View of the neighborhood around the cathedral in 2008 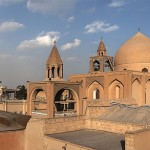 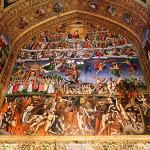 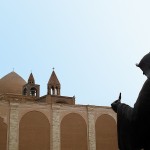 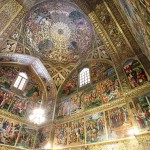 Frescoes in the interior 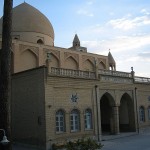 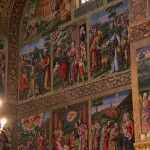 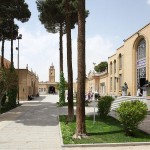 Courtyard of the Cathedral with the museum at right 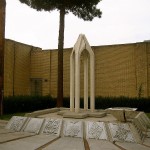 The Armenian Genocide memorial at the courtyard