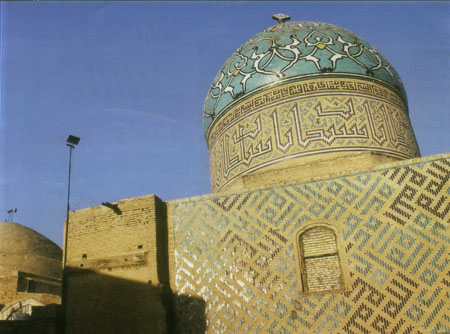 Emamzadeh Esmaeil is a historical complex in Isfahan, Iran, which dates back to the Seljuk and Safavid era. This complex is near the Jameh Mosque of Isfahan, in the Hatef street. The eldest part of this complex is Shia mosque (the meaning of the name is unknown) and remnants of a seljukid minaret. Nastaliq inscription on the northern wall says, that this mosque dates back to Imam Ali’s era, but according to archeological researches no parts of it is older than Seljuk era. This mosque has been completely rebuilt and repaired in the Safavid era. The tiling of marble mihrab in its Shabestan is one of the parts, which belongs to the Safavid age. Its tomb, portico and yard date back to Safavid time and there are some relics in them from the famous kings like Abbas I, Safi and Sultan Husayn. The portal of Emamzadeh Esmaeil’s yard is under an interesting dome from the Turkmen age. There are two gravestones in the Imamzadeh. One of the gravestones belongs to the daughter of the last Safavid king Ismail III.