Tepe Sialk  is a large ancient archeological site (a tepe or Persian tappeh, “hill” or “mound”) in a suburb of the city of Kashan, Isfahan Province, in central Iran, close to Fin Garden. The culture that inhabited this area has been linked to the Zayandeh River Culture.

Tepe Sialk was excavated for three seasons (1933, 1934, and 1937) by a team headed by Roman Ghirshman. Studies related to the site were conducted by D.E. McCown, Y. Majidzadeh, and P. Amieh. Excavation was resumed for several seasons between 1999 and 2004 by a team from the University of Pennsylvania and Iran’s Cultural Heritage Organization led by Sadegh Malek Shahmirzadi called the Sialk Reconsideration Project.

Artifacts from the original dig ended up mostly at the Louvre, while some can be found at the British Museum, the Metropolitan Museum of Art in New York, and the National Museum of Iran and in the hands of private collectors.

These artifacts consisted of some very fine painted potteries.

A view of the south façade of what remains from the first (of two) tepe. 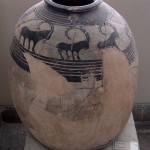 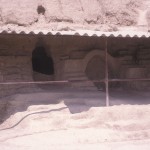 The 5,500-year-old skeletons and other unearthed artifacts here are preserved and off-limits to visitors. 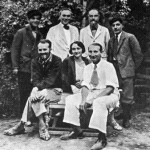 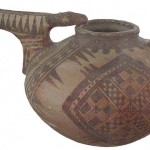 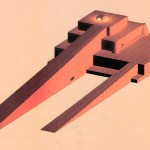 CAD rendering of Sialk ziggurat based on archeological evidence 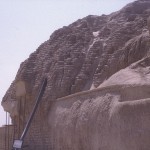 Details of the wall of the second platform of the first tepe.