Khodaafarin Bridges  (Azerbaijani: Xudafərin körpüsü) are two arch bridges across the Aras River, which connect the territory de facto controlled by non-recognized Nagorno-Karabakh Republic and de jure belonging to Azerbaijan (it is part of Azerbaijan according to international law) with Iran. The first one with 11 arches was built in the 11–12th centuries and the second with 15 arches in the 13th century.

View of the Khodaafarin bridge 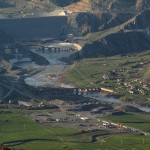