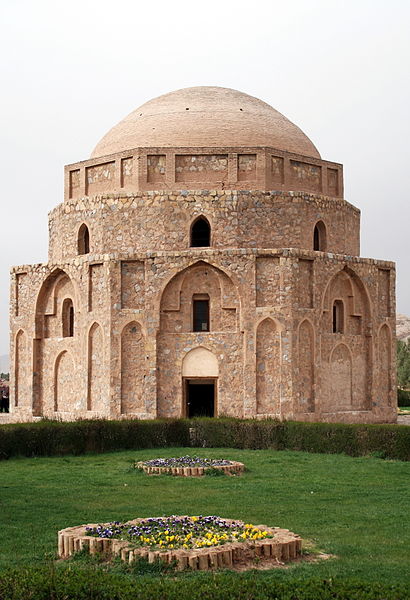 Jabalieh or Rock Dome, also known as the Gabri Dome, is located in Kerman, Iran. Gonbad-e Jabaliyeh also goes by the names, Gonbad-e Jabaliyeh, Gonbad-e Jabalīyeh, gnbd jblyh,  The dome, a place of historical importance in Iran, has been constructed of stone and brick, though the building is of stone and gypsum, and its architectural affects have been inspired from the Sassanid period. It was repaired during the first decades of the advent of Islam in Iran. Its center lies at 30.2923400°N 57.1168000°E and it has an elevation of 1768 meters above sea level.

It is of octagonal design and comprises three floors crowned by a rather flat dome, totally empty inside. It appears to predate the 2nd millennium AD and may have been a Zoroastrian building, and is remarkable because of being constructed of stone rather than the more usual brick.

To get there, take a shared taxi from Shohada Square. The rocky outcrops over looking the Martyrs Cemetery just south-east of the Gonbad-e Jabalieh, offer a fine outlook over Kerman, if one manages to climb to the top.