Mount Bisotoun is a mountain in the Kermanshah Province is located in the middle of the western part of Iran. It is located 525 kilometers (326 mi) from Tehran.

It is well known for its rock relief in which the great Achaemenian King, Darius the Great, had the narrative of his exploits engraved around B.C. 500.

A legend began around Mount Bisotoun, as written about by the Persian poet Ferdosi in his Shahnameh (Book of Kings) circa 1000 AD, about a man named Farhad, who was a lover of Khosroes’ wife, Shirin. The legend states that, exiled for his transgression, Farhad was given the task of cutting away the mountain to find water; if he succeeded, he would be given permission to marry Shirin. After many years and the removal of half the mountain, he did find water, but was informed by Khosroes that Shirin had died. He went mad, threw his axe down the hill, kissed the ground and died. It is told in the book of Khosrow and Shirin that his axe was made out of a pomegranate tree, and, where he threw the axe, a pomegranate tree grew with fruit that would cure the ill. Shirin was not dead, according to the story, and mourned upon hearing the news. 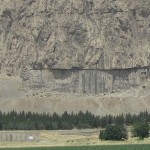 Farhad Tarash in base of the Mount 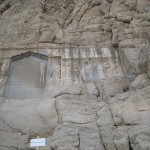 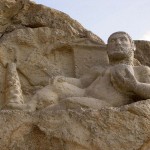 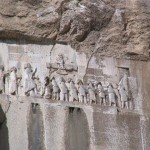 Darius I the Great’s inscription