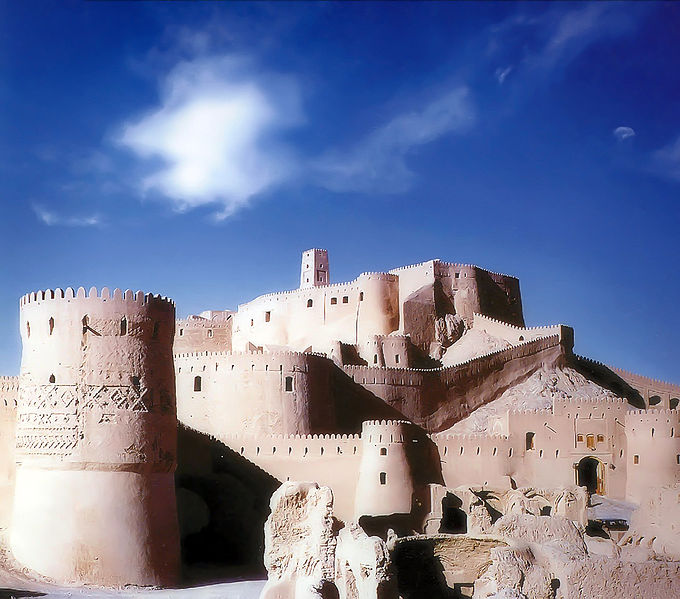 The Arg-e Bam  was the largest adobe building in the world, located in Bam, a city in the Kermān Province of southeastern Iran. It is listed by UNESCO as part of the World Heritage Site “Bam and its Cultural Landscape”. The origin of this enormous citadel on the Silk Road can be traced back to the Achaemenid period (6th to 4th centuries BC) and even beyond. The heyday of the citadel was from the 7th to 11th centuries, being at the crossroads of important trade routes and known for the production of silk and cotton garments.

The entire building was a large fortress in whose heart the citadel itself was located, but because of the impressive look of the citadel, which forms the highest point, the entire fortress is named the Bam Citadel.

On December 26, 2003, the Citadel was almost completely destroyed by an earthquake, along with much of the rest of Bam and its environs. A few days after the earthquake, the Iranian President Mohammad Khatami announced that the Citadel would be rebuilt.

The Bam Citadel before the 2003 earthquake 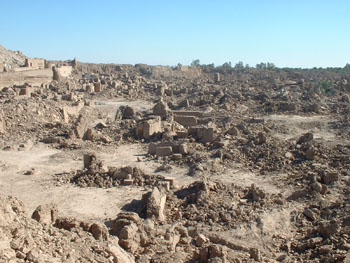 The Bam Citadel after the 2003 earthquake

Larger than nearby Arg-é Rayen, the area of Bam Citadel is approximately 180,000 square meters (44 acres), and it is surrounded by gigantic walls 6–7 metres (20–23 ft) high and 1,815 metres (5,955 ft) long. The citadel features two of the “stay-awake towers” for which Bam is famed – there are as many as 67 such towers scattered across the ancient city of Bam.

The planning and architecture of the citadel are thought out from different points of view. From the present form of the citadel one can see that the planner(s) had foreseen the entire final form of the building and city from the first steps in the planning process. During each phase of building development the already-built part enjoyed a complete figure, and each additional part could be “sewn” into the existing section seamlessly.

The citadel is situated in the center of the fortress-city, on the point with widest view for security.

In the architectural form of Bam Citadel there are two different distinguishable parts:

Among the houses, three different types are recognizable:

All buildings are made of non-baked clay bricks, i.e. adobes. Bam Citadel was probably, prior to the 2003 earthquake, the biggest adobe structure in the world.

The Citadel was used as the major location site for Valerio Zurlini’s film of The Desert of the Tartars.

The citadel of Arg-e Bam: The world’s largest adobe structure, dating to at least 500 BC.

When the gate of the city was closed, no human or animal could enter. The inhabitants could continue living for a long period of time in isolation as they had access to a well, gardens, and domestic animals inside. When the fortress-city was besieged the inhabitants could remain in the city while the soldiers could defend it, protected by high walls and towers. The wall has one blind spot.

Besides the watch towers and ornamented tops of the high walls on the skyline of the fortress, the wind-catchers or wind-towers (in Persian: bādgir ) are remarkable. They are structures protruding from the buildings to catch the wind and direct it into the buildings. Sometimes the air is passed over a water basin in the building to cool it and remove dust. Different types of wind towers are utilized for different buildings. For example, there are 4-directional wind-towers for larger and more important buildings, which are able to catch the wind from different directions, and there are one directional wind towers for smaller buildings.

The 2003 earthquake in Bam destroyed more than 80 percent of the citadel. As a World Heritage Site, several countries are cooperating in the reconstruction. Japan, Italy, and France are among countries which cooperated from the beginning. Japan has granted some US$1.3 million to Iran for the reconstruction, and has supported this project by sending equipment and creating the 3D plan of Bam Citadel to increase the accuracy of the renovation. Italy has funded US$300,000 and has dispatched a team of experts to restore the citadel’s main tower. France has provided the map of Bam Citadel. The World Bank has also granted a large sum of money to this project.