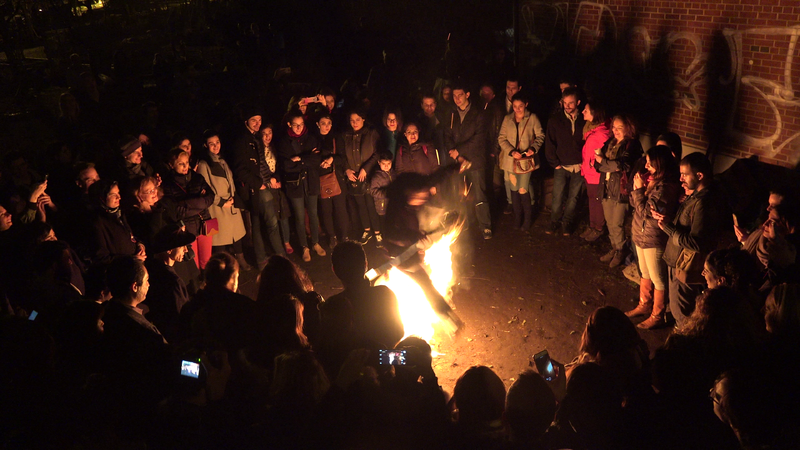 Chaharshanbe Suri , also called the Festival of Fire is an Iranian festival celebrated on the eve of the last Wednesday before Nowruz (the Iranian New Year).

Charshanbe Suri is a prelude to Nowruz (the Iranian New Year), and is celebrated with firework displays and the jumping over of fires. Mixed nuts and berries are also served during the celebration.

The celebration usually starts in the evening, with people making bonfires and jumping over them (purificatory practices found also in the Celtic festival of Beltane).

The traditional poetic quote zardi ye man az to, sorkhi ye to az man is also sung, which literally means “my yellow is yours, your red is mine.” This means you want the fire to take your pallor, sickness, and problems and replace them with warmth and energy. It is a purification rite, which is traditionally regarded necessary before the arrival of spring at the vernal equinox. 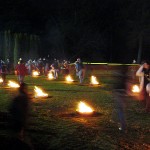 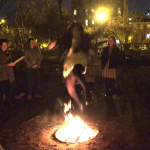 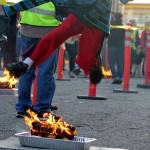 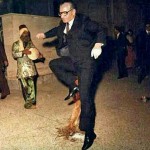 The festival has also a custom similar to Trick-or-treating, in which people wear disguises and go door-to-door to bang spoons against plates or bowls and receive packaged snacks. The custom is called Qashoq zani ( Qāšoq zani), translated as “Banging spoons.”

The origin of the festival dates back to at least 1700 BC, during the early Zoroastrian era. Ancient Iranians celebrated the festival of Hamaspathmaedaya (Avestan: Hamaspaθmaēdaya), the last five days of the year in honor of the spirits of the dead, which is today referred to as Farvardigan. They believed that the spirits of the dead would come for reunion. The seven holy immortals (Amesha Spenta) were honored, and were bidden a formal ritual farewell at the dawn of the New Year. The festival also coincided with festivals celebrating the creation of fire and humans. In the Sassanid era, the festival was divided into two distinct pentads, known as the lesser and the greater Panje. The belief had gradually developed that the Lesser Panje belonged to the souls of children and those who died without sin, whereas the Greater Panje was for all souls.

A custom once in vogue in Tehran was to seek the intercession of the so-called Pearl Cannon (Tup-e-Morvarid) on Charshanbe Suri. This heavy gun, which was cast by the Persian foundryman Ismāil Isfahāni in 1800, during the reign of Fath Ali Shah of the Qajar dynasty, became the focus of many popular myths. Until the 1920s, it stood in Arg Square (Meydān e Arg), to which the people of Tehran used to flock on the eve of Charshanbe Suri; spinsters and childless or unhappy wives climbed up and sat on the barrel or crawled under it, and mothers even made ill-behaved and troublesome children pass under it in the belief that doing so would cure their naughtiness. These customs died out when the Pearl Cannon was moved to the Army’s Officers’ Club, sometime in the 1920s. There was also another Pearl Cannon in Tabriz. Girls and women used to fasten their dakhils (pieces of a paper or cloth inscribed with wishes and prayers) to its barrel on the eve of Charshanbe Suri. In times, the cannon had been used as a sanctuary for political or non-political fugitives to be immune to arrest or to protest from family problems.

Sadegh Hedayat, Iranian writer of prose fiction and short stories, has a book with the name of this cannon, Tup-e-Morvarid, that criticize the old beliefs of Iranian folklore. The book points also to the origin of the Pearl Cannon.

Today, the Pearl Cannon is placed in the opening of the Building Number 7 of the Ministry of Foreign Affairs in the 30th Tir Avenue, and the Cultural Heritage Organization of Iran is still in argument with the ministry to displace the gun to a museum.

Much of the symbolism of the act of jumping over fire is linked to astrological connotations associated with the sign of Pisces (Esfand), related to the subconscious mind, hidden resources, hidden problems, and social responsibility. The human has to face his ultimate fears, and he does so by jumping over fire. Wednesday is chosen because of its ancient association with the fourth day of Mercury, and Mercury being the messenger of Gods.