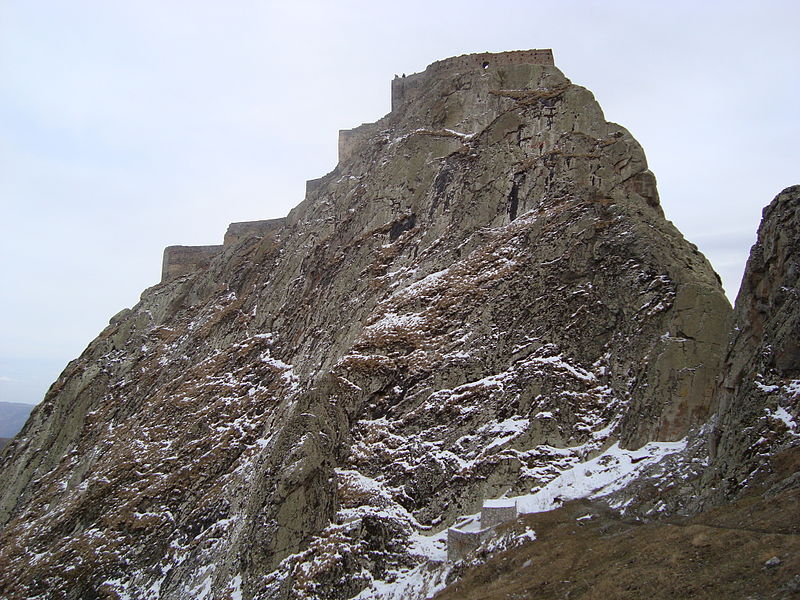 Pāpak Fort  or Babak Castle, also known as the Immortal Castle or Republic Castle, is a large citadel and National Symbol of Iranians on the top of a mountain in the Arasbaran forests, which is located 6 km southwest of Kalibar City in northwestern Iran. It has been identified as the stronghold of Pāpak Khorramdin, the leader of the Khurramites in Azarbaijan who fought the Islamic caliphate of Abbassids. Iranian Azarbaijanis gather at Babak Castle during the first weekend in July for the annual commemoration of Babak Khorramdin.

The ascent to the Castle is not for the infirm, elderly, or those afraid of heights. A series of long, and in places, broken steps lead the traveler to the top of a hill from where there are several choices for further ascent. The easiest is straight in front of the steps and consists of a long dirt track. As there are no sign posts towards the Castle, walk towards the peak on your left hand side but do not leave the dirt track. You will need hiking boots, a sun hat, plenty of water, and at least 3 hours for the climb, and 2 hours for the descent. At the end of the dirt track, turn left onto the rocky mountain side, and beware of slipping. The first of sign of the ruins will appear on your left, but do not become too complacent: the actual Castle is another 2 peaks march away. The first peak offers spectacular views of the Castl. After ascending a second peak, with its own ruins, you will see the Castle perched on top a jagged cliff. Ascending the Castle steps is a dangerous process, as there are sheer cliffs on your right hand side, and no protective rails or fences to prevent a fall of several hundred meters. Take extreme care of the edge, and hold on to your children. Once you have climbed the pinnacle of the cliff, you will truly appreciated the amazing effort in building and maintaining a fort at this altitude. Unfortunately, you will also have to tolerate the graffiti on the ancient walls, and young people playing chicken on top of the Castle walls. Under no circumstances should you even consider climbing these walls: first, this can damage the ancient structure, and second, a fall of several thousands of meters would lead to certain death. Nevertheless, the experience afterward is well worth the strenuous climb: the surrounding Arasbaran oak forest, jagged cliffs, mountains in the distance, and the history of the place combine to create one of Iran’s most beautiful vistas. The castle, built on 2300-2600 meter heights, surrounded by gorges as deep as 400 to 600 meters, is believed to belong to the Parthian dynasty and modified under the Sasanid dynasty. To reach the castle, one has to trek a tortuous and narrow passageway and then cross a corridor-shaped temple, 200 meters in lengths.