Ali Qapu (Persian: Āli Qāpu‎, from Ottoman Turkish: Âli Qapı, meaning “High Porte”) is a grand palace in Isfahan, Iran. It is located on the western side of the Naqsh e Jahan Square, opposite to Sheikh Lotfollah Mosque, and had been originally designed as a vast portal. It is forty-eight meters high and there are seven floors, each accessible by a difficult spiral staircase. In the sixth floor, Music Hall, deep circular niches are found in the walls, having not only aesthetic value, but also acoustic.

The name Ali Qapu, from Arabic “Ālī” (meaning “imperial” or “great”), and Turkic “Qāpū” (meaning “gate”), was given to this place as it was right at the entrance to the Safavid palaces which stretched from the Naqsh e Jahan Square to the Chahar Baq Boulevard. The building, another wonderful Safavid edifice, was built by decree of Shah Abbas I in the early seventeenth century. It was here that the great monarch used to entertain noble visitors, and foreign ambassadors. Shah Abbas, here for the first time, celebrated the Nowruz (Iranian New Year) of 1006 AH / 1597 C.E.

Ali Qapu is rich in naturalistic wall paintings by Reza Abbasi, the court painter of Shah Abbas I, and his pupils. There are floral, animal, and bird motifs in his works. The highly ornamented doors and windows of the palace have almost all been pillaged at times of social anarchy. Only one window on the third floor has escaped the ravages of time. Ali Qapu was repaired and restored substantially during the reign of Shah Sultan Hussein, the last Safavid ruler, but fell into a dreadful state of dilapidation again during the short reign of invading Afghans. Under the reign of Nasir ol Din Shah e Qajar (1848–96), the Safavid cornices and floral tiles above the portal were replaced by tiles bearing inscriptions.

Shah Abbas II was enthusiastic about the embellishment and perfection of Ali Qapu. His chief contribution was given to the magnificent hall, the constructures on the third floor. The 18 columns of the hall are covered with mirrors and its ceiling is decorated with great paintings.

The chancellery was stationed on the first floor. On the sixth, the royal reception and banquets were held. The largest rooms are found on this floor. The stucco decoration of the banquet hall abounds in motif of various vessels and cups. The sixth floor was popularly called the Music Hall. Here various ensembles performed music and sang songs.

From the upper galleries, the Safavid ruler watched Chowgan (polo), maneuvers and the horse-racing opposite the square of Naqsh e Jahan.

The palace is depicted on the reverse of the Iranian 20,000 rials banknote. 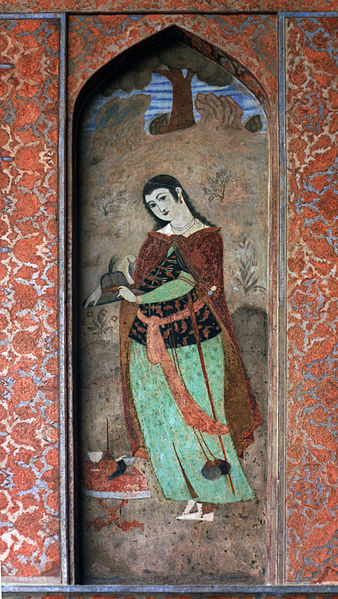 Fresco from the portico of the palace, depicting a Persian woman

The Ali Qapu has multiple connotations, but generally connotes entrance or supreme gate to the complex of palaces and public buildings of the Safavid Government.

Ali Qapu’s building was founded in several stages, beginning from a building with a single gate, with entrance to the government building complex, and gradually developed, ending in the existing shape. The period of the development, with intervals, lasted approximately seventy years.

First Stage: The initial building acting as entrance to the complex was in cubical shape and in two stories, with dimensions measuring 20 x 19 meter and 13 meter high.

Second Stage: Foundation of the upper hall, built on the entrance vestibule, with cubical shape, over the initial cubic shape structure with the same height in two visible stories.

Third Stage: Foundation of the fifth story, the Music Amphitheater or the Music Hall, built on the lower hall, using the central room for sky light, and thus the vertical extension being emphasized.

Fourth Stage: Foundation of the eastern verandah or pavilion advancing towards the square, supported by the tower shaped building. By foundation of this verandah, the entrance vestibule was extended along the main gate and passage to the market, perpendicular to the eastern flank of the building.

Fifth Stage: Foundation of the wooden ceiling of the balcony, supported by 18 wooden columns, and contemporaneous with erection of the ceiling, an additional stairway of the southern flank was founded and was called the Kingly Stairway.

Sixth Stage: During this stage, a water tower was built in the northern flank for provision of water for the copper pool of the columned balcony. Plaster decorations in reception story and the Music Hall.

The room on the sixth floor is also decorated with plaster-work, representing pots and vessels and one is famous as the music and sound room. It is certainly well worth visiting for the cut out decorations round the room, which represent a considerable artistic feat. These cut out shapes were not placed there to act as cupboards; the stucco-work is most delicate and falls to pieces at the highest touch. So we conclude that it was placed in position in these rooms for ornament and decoration. The rooms were used for private parties and for the king’s musicians, and these hollow places in the walls retained the echoes and produced the sounds of the singing and musical instruments clearly in all parts.

The decoration of the large room on the third floor which opens out on the large pillared hall, and which was used by Shah Abbas for entertaining his official guests, is the most interesting. Fortunately, the ceilings, on which birds are depicted in their natural colors, have remained without interference in their original state from Safavid times, and these are the best roofs in the building.

Exterior view of the palace 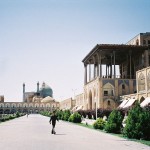 Another exterior of the palace, with Shah Mosque in the back 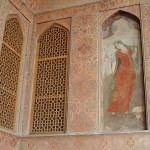 Paiting of a Persian woman 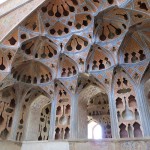 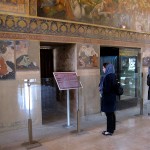 Paintings in the palace 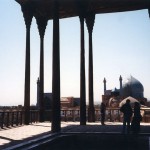 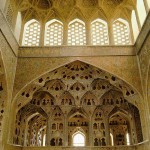 Another view of the Music Hall 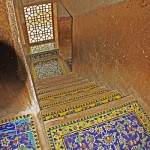 Staircases inside the palace 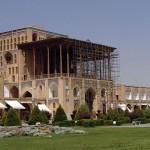 Another exterior view of the palace 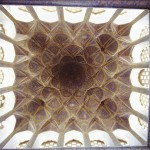 Ceiling of the Music Hall