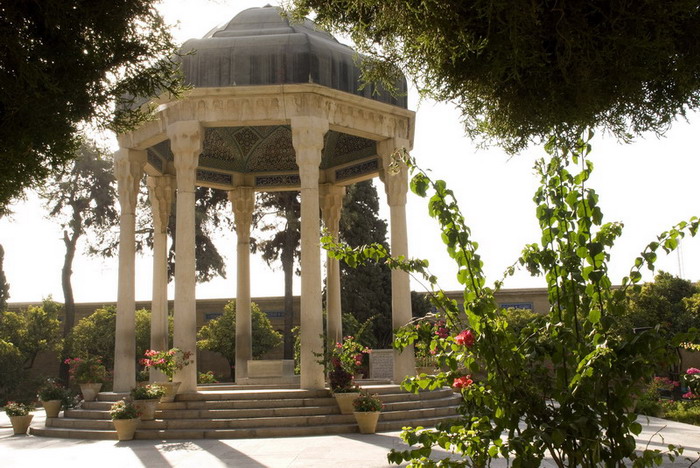 The Tomb of Hafez and its associated memorial hall, the Hāfezieh, are two memorial structures erected in the northern edge of Shiraz, Iran, in memory of the celebrated Persian poet Hafez. The open pavilion structures are situated in the Musalla Gardens on the north bank of a seasonal river and house the marble tomb of Hafez. The present buildings, built in 1935 and designed by the French architect and archaeologist André Godard, are at the site of previous structures, the most well-known of which was built in 1773. The tomb, its gardens, and the surrounding memorials to other great figures are a focus of tourism in Shiraz.

The pavilion over the tomb of Hafez, with the memorial hall in the background

Activities to restore and expand the memorial to Hafez began in 1931, when the orange grove was repaired and the Hāfezieh was altered by a governor of Fars and Isfahan, Faraj-Allāh Bahrāmi Dabir-e Aʿẓam. Additional improvements were delayed until the Ministry of Education organised for a new building to be built, in 1935. André Godard, a French archaeologist and architect, was the technical director of the Department of Antiquities at the time, and was commissioned to design the new buildings.

Alterations to Hafez’s tomb involved elevating it one metre above ground level and encircling it with five steps. Eight columns, each ten metres tall, support a copper dome in the shape of a dervish’s hat. The underside of the dome is an arabesque and colourful mosaic.

The original, four-columned memorial hall built in 1773 by Karim Khan Zand was extensively expanded. Sixteen pillars were added to the four original, creating a long verandah, and on several façades are engraved ghazals and other excerpts from Hafez’s poetry.

Several rectangular pools have been added amongst the gardens, and well-maintained orange trees, paths, streams, and flower beds create a pleasant environment for the tourism hub of Hafez’s tomb and memorial hall. A tea house on the grounds provides refreshments in a traditional setting. The dome over Hafez’s grave is well lit at night, providing an attractive focal point. The former tomb of Qāsem Khan Wāli is now a library containing 10,000 volumes dedicated to Hafez scholarship. 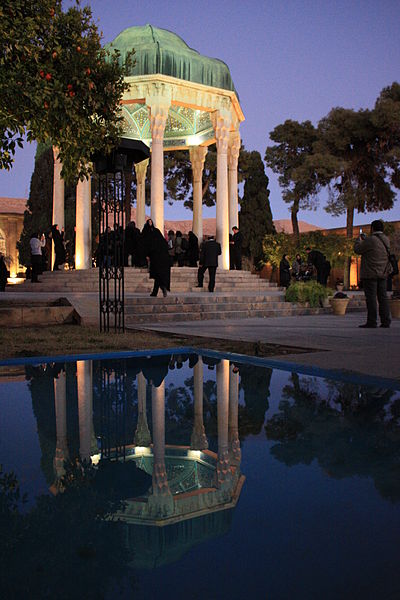 The tomb of Hafez illuminated at night 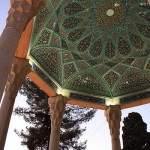 Ceiling of the pavilion 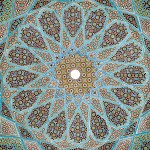 Enamelled tiles mosaic on the ceiling of the pavilion