The Blue Mosque (Azerbaijani: Göy məscid; Persian:  Masjed-e Kabūd) is a famous historic mosque in Tabrīz, Iran. The mosque and some other public buildings were constructed in 1465 upon the order of Jahan Shah, the ruler of Kara Koyunlu.

The mosque was severely damaged in an earthquake in 1779, leaving only the entrance iwan. Reconstruction began in 1973 by the late Reza Memaran Benam under the supervision of Iranian Ministry of Culture. However, the tiling is still incomplete.

The Blue Mosque of Tabrīz

The Blue mosque of Tabriz was built upon the order of Jahan Shah the ruler of Kara Koyunlu dynasty which made Tabriz the capital of his Kingdom. His Kingdom covered major parts of modern Iran, Azerbaijan, and Turkey. He was killed by Uzun Hassan (the ruler of Ak Koyunlu) and buried on the only parts of the mosque that survived.

The mausoleum was built in the southern section of the mosque and is entirely covered with high marble slabs on which verses from Quran are engraved in Thuluth script on a background of fine arabesques. The roof of the mausoleum and the main dome chamber of the mosque collapsed during an earthquake in 1779 A.D. and was rebuilt in 1973 thanks to the efforts of Reza Memaran Benam (a famous architect from Tabriz) under the supervision of the national organization for preservation of ancient monuments.

The diverse Kufic, and Thuluth scripts, the arabesque patterns, and the choramatic compositions of these facades, were created by Nematollah-ben-Mohammad-ol-Bavab, the famous calligrapher. The walls inside and outside had been covered with mosaic tiles. 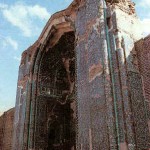 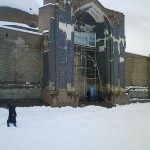 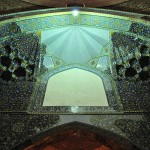 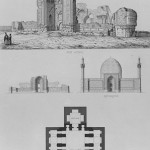 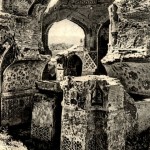 The Blue mosque before reconstruction 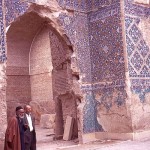 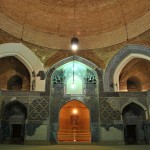 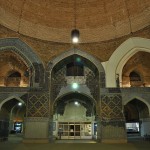 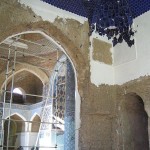 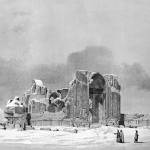 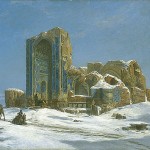 Painting of Blue mosque by a French tourist, Jules Laurens, 1872 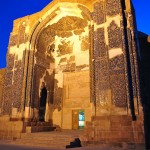 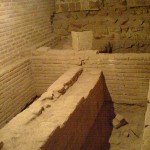 Jahan Shah Grave at Southern Part of the Mosque 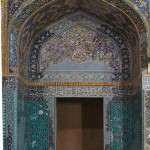 One of the inner doors