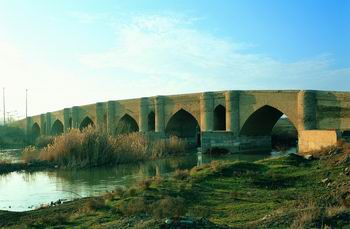 Kohneh Bridge (Persian:  Pol-e-Kohneh‎) is a bridge across the river Qaresoo in the eastern suburb of Kermanshah city in Iran. It is near the village of Morad Abad.

When the city was walled, people would cross the bridge to the city gate called Isfahan-Gate. The bridge extends 186 m and its width is 9 meters wide in an eastern-western direction. The supports of the bridge are hexagonal, and their interior parts are constructed with rubble-stone and plaster mortar, and their facing is of chiseled stone-blocks. The bridge has six spans. The spans have ribbed arches and are made of brick. The medium height of the arches from the tip of the arch to the river bed is 4.4 m.