The Jāmeh Mosque of Yazd (Persian: Masjid-e-Jāmeh Yazd) is the grand, congregational mosque (Jāmeh) of Yazd city, within the Yazd Province of Iran.

The 12th-century mosque is still in use today. It was first built under Ala’oddoleh Garshasb of the Al-e Bouyeh dynasty. The mosque was largely rebuilt between 1324 and 1365, and is one of the outstanding 14th century buildings of Iran.

The mosque is a fine specimen of the Azari style of Persian architecture. The mosque is crowned by a pair of minarets, the highest in Iran, and the portal’s facade is decorated from top to bottom in dazzling tile work, predominantly blue in colour. Within is a long arcaded courtyard where, behind a deep-set south-east iwan, is a sanctuary chamber (shabestan). This chamber, under a squat tiled dome, is exquisitely decorated with faience mosaic: its tall faience Mihrab, dated 1365, is one of the finest of its kind in existence. 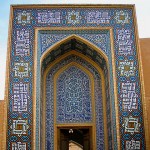 Back entrance to the mosque 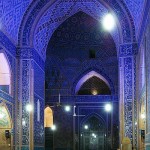 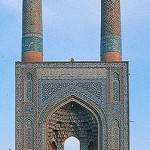 The 800 year old Masjed-i Jamé mosque of Yazd has one of the tallest minarets among Persian mosques. 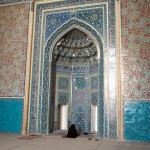 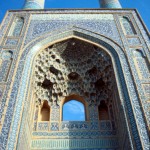 The grand iwan of the mosque. 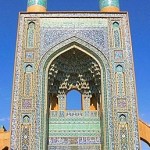 Jameh Mosque has the tallest portal of all mosques in Iran 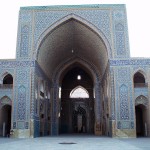 Arch over the Mihrab.