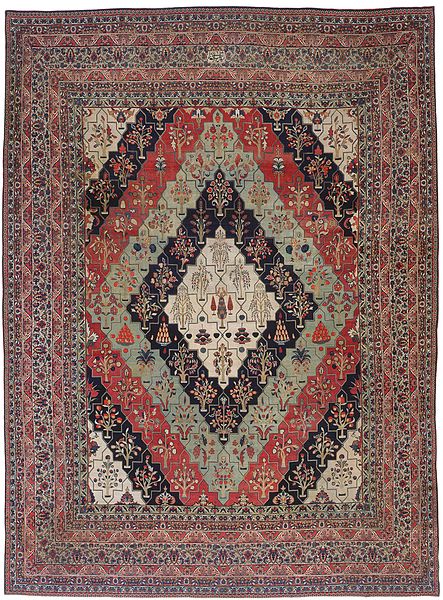 Kerman carpets (sometimes “Kirman”) are one of the traditional classifications of Persian carpets. They are named after Kerman, which is both a city and a province located in south central Iran, though, as with other such designations the term describes a type which may have been manufactured somewhere else. Kerman has been a major center for the production of high quality carpets since at least the 15th century. In the 18th century, some authors considered the carpets from the province of Kerman, especially at Siftan, to be the finest of all Persian carpets, partly because of the high quality of the wool from the region, ·  known as Carmania wool.

In the world of antique Persian rugs, Kerman carpets are celebrated as being among the best. Kerman rugs are prized by collectors for a myriad of reasons, which includes but it not limited to: a wide range of designs, a broad pallet, utilization of natural dyes and fibers, immense tensile strength and abrasion resistance, and expert color combinations. No two Kerman rugs are precisely alike, but these general characteristics typify this enduringly popular style.

Motifs Diversity of motifs are woven based on market requests. Not only all well-known and original Persian motifs, but you can find western motifs in Kerman rugs, including striped motifs, various repetitive motifs, vase, Toranj (Citron), symmetric, and also garden, animal shapes, predaceous and pictorial rugs. Borders motifs following market requests, especially USA market. Kerman antique carpets are so elegant and sumptuous, and continued by Toranj motif border which is surrounded by margins and minor and narrow lines.

Still, in the 19th century, the city of Kirman had a reputation for its carpets, attributed to a very long history of urban workshops, the supply of a very fine wool, the presence of master weavers and the artistic superiority of local designs. After Nader Shah, Naser al-Din Shah commissioned carpets from Kerman. Among the more famous Kerman carpet producers of the 19th century include Costigian, Ghastili and Dilmaghani, the latter still in operation & considered an important connection of 19th and 20th century production of carpets in Kerman. May Beattie has defined 7 classes of Kerman carpets and identified a unique structure she called the “Vase technique” characterised by three shoots of weft between rows of knots. The first and third are typically woolen and at high tension, while the second one, at low tension, is normally made of silk or cotton. Warps are markedly displaced and the Persian knot is open to the left. This technique distinguishes Kerman carpets from both the Safavid (1501-1722) and subsequent (1722-1834) periods.” Most Persian carpets, in contrast, used the “Turkish knot”. Kirman carpets of the 18th century and later very often use “lattice” patterns, with the central field divided by a lattice design giving many small compartments. A notable illustration is a carpet having belonged to William Morris, now on display at the Victoria and Albert Museum. Later all sorts of designs were made in Kirman, including large figurative ones. The Victoria and Albert Museum in London has a carpet of 1909 with a design copying a painting by the 18th century French artist Antoine Watteau. The dye process for Kerman carpets occurred while the wool was still in flock and before spinning, allowing for uniform color. The palette for Kerman carpets is as brilliant as it is varied. Tones can range from ivory, blue and magenta to a more golden and saffron cast. 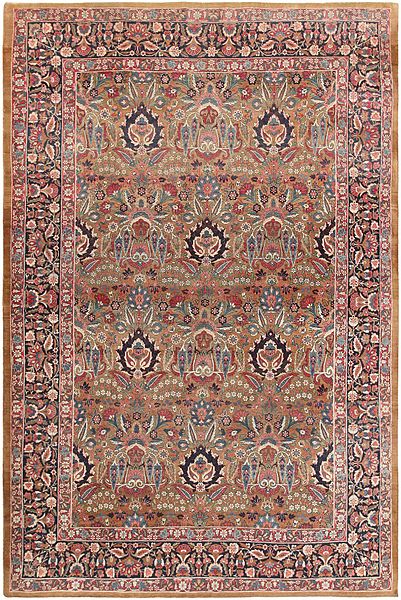 The design pattern of Kerman carpets are also a distinct feature. Vase carpets, a type of Kerman rug distinctive of the 16th and 17th centuries, are characterized by an allover pattern of stylized flowers and oversized palmettes with vases placed throughout the field.

Another rare and distinct variation of Kerman carpets is the Lavar or Ravar Kerman. Although Lavar is the improper name, some are still labeled as such. These carpets were produced in Ravar village next to Kerman city in the northern region, and are known particularly for their fine weave and elegant, classically derived design of allover and central medallion formats.

Whether Ravar Kerman or Kerman, these antique rugs can boast fine woven reproductions of European paintings, as well as curvilinear, dense allover floral patterns. Floral patterns woven into Kerman carpets are derivative of shawls for which Kerman was also the center of producing in the early to mid- 19th century. Most Ravar or Lavar Kerman carpets include a signature, either that of the weaver or to whom the carpet was woven for. It is important to note, however, that there is no one design or style of Kerman rug that is vastly more popular than any other. Because of the tremendous demand for rugs produced in Kerman, and because of the complex demographics of those generating the demand, a surprising variety of styles and designs were produced. While some Kerman rugs were woven explicitly for monied buyers from the West, there were of course local consumers as well.

Kerman rugs and carpets were woven in all sizes, some extending out to 10 feet, and some extending more than that. Typical manufacturing used an asymmetrical knot on cotton foundation, but rare examples include silk or part silk piles, or silk foundations with wool pile.

While There is no one type of Kerman rug that defines the style, the famous “Carpet Design” is certainly the most present in the popular imagination. A Kerman “Vase carpet” from middle of the XVII, estimated at 900 Euro by the Kunstauktionshaus Georg Rehm in Augsburg, was six months later sold at Christie’s in London for 7,5 million euro. It was a record for both carpets and Islamic art in general. This particular carpet, though, had no vase on it; only a continuing pattern of intricately joined leaves that gave the design an unusual energy and charm, it consists of a Herati all-over pattern spread throughout the indigo-blue field of the carpet. But it was the weaving technique that alerted the dealer to the fact that it might be a “vase” carpet all the same. By the 17th century, when this carpet was made, Kirman’s designers were at their most inventive and their weaving techniques of a sophistication not seen in other parts of the Persian empire. The weavers had learned to set their looms so that the cotton warps were on two different levels. They then threaded the wool wefts, leaving some tight and others sinuous, giving an immediately recognisable wavy finish to the surface of the carpet. The carpet had an excellent provenance, having belonged to the legendary French art collector the Comtesse de Béhague, Martine de Behague (1870-1939), who formed a stunning collection of antiquities, Iranian art and carpets. 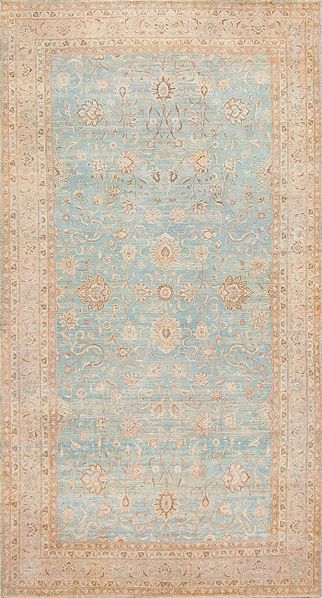