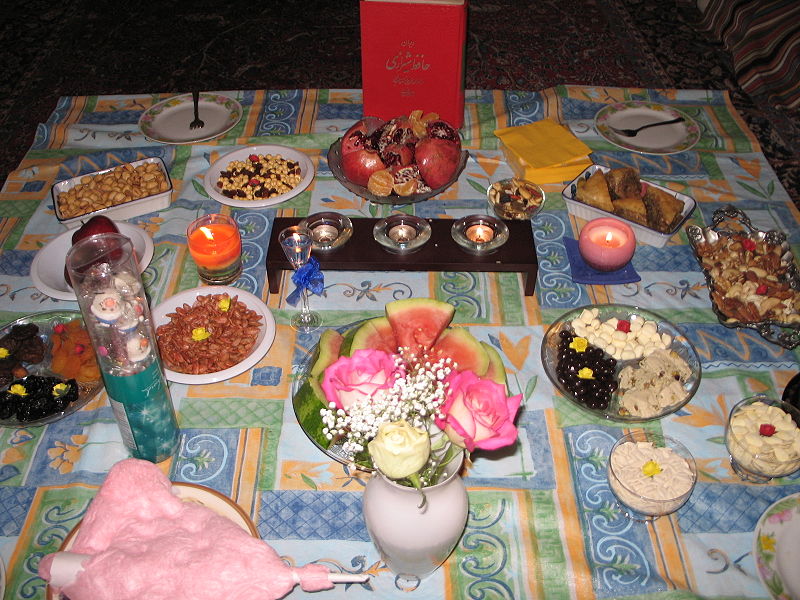 Shab-e Yalda (“Yalda night”) or Shab-e Chelleh (“night of forty”,‎‎) is an Iranian festival celebrated on the “longest and darkest night of the year,” that is, in the night of the Northern Hemisphere’s winter solstice. Calendrically, this corresponds to the night of December 20/21 (±1) in the Gregorian calendar, and to the night between the last day of the ninth month (Azar) and the first day of the tenth month (Dey) of the Iranian civil calendar.

The longest and darkest night of the year is a time when friends and family gather together to eat, drink and read poetry (especially Hafez) until well after midnight. Fruits and nuts are eaten and pomegranates and watermelons are particularly significant. The red color in these fruits symbolizes the crimson hues of dawn and glow of life. The poems of Divan-e-Hafez, which can be found in the bookcases of most Iranians families, are intermingled with peoples’ life and are read or recited during various occasions like this festival and at Nowruz.

The longest and darkest night of the year marks “the night opening the initial forty-day period of the three-month winter”, from which the name Chella, “forty”, derives. There are all together three 40-day periods, one in summer, and two in winter. The two winter periods are known as the “great chella” period (1 Dae to 11 Bahman, 40 full days), followed/overlapped by the “small chella” period (10 Bahman to 30 Bahman, 20 days + 20 nights = 40 nights and days). Shab-e Chella is the night opening the “big chella” period, that is the night between the last day of autumn and the first day of winter. The other name of the festival, ‘Yaldā’, is ultimately a borrowing from Syriac-speaking Christians. In the 1st-3rd centuries, significant numbers of Eastern Christians settled in Arsacid and Sassanid territories, where they had received protection from religious persecution. Through them, Western Iranians (i.e. Parthians, Persians etc.) came in contact with Christian religious observances, including, it seems, Nestorian Christian Yalda, which in Syriac (a Middle Aramaic dialect) literally means “birth” but in a religious context was also the Syriac Christian proper name for Christmas, and which—because it fell nine months after Annunciation—was celebrated on eve of the winter solstice. The Christian festival’s name passed to the non-Christian neighbours and although it is not clear when and where the Syriac term was borrowed into Persian, gradually ‘Shab-e Yalda’ and ‘Shab-e Cheleh’ became synonymous and the two are used interchangeably.

An association with the 40-day “chella” period is preserved amongst Iranian Azerbaijanis and Azerbaijan Republic, who call it Çillə Gecəsi  which means the beginning of the first 40 days of winter.

Shab-e Chella was officially added to Iran’s List of National Treasures in a special ceremony in 2008.

In Zoroastrian tradition the longest and darkest night of the year was a particularly inauspicious day, and the practices of what is now known as “Shab-e Chelleh/Yalda” were originally customs intended to protect people from evil  during that long night, at which time the evil forces of Ahriman were imagined to be at their peak. People were advised to stay awake most of the night, lest misfortune should befall them, and people would then gather in the safety of groups of friends and relatives, share the last remaining fruits from the summer, and find ways to pass the long night together in good company. The next day (i.e. the first day of Dae month) was then a day of celebration, and (at least in the 10th century, as recorded by Al-Biruni), the festival of the first day of Dae month was known as Ḵorram-ruz (joyful day) or Navad-ruz (ninety days [left to Nowruz]). Although the religious significance of the long dark night have been lost, the old traditions of staying up late in the company of friends and family have been retained in Iranian culture to the present day.

References to other older festivals held around the winter solstice are known from both Middle Persian texts as well as texts of the early Islamic period. In the 10th century, Al-Biruni mentions the mid-year festival (Maidyarem Gahanbar) that ran from 11-15 Dae. This festival is generally assumed to have been originally on the winter solstice, and which gradually shifted through the introduction of incalcation. Al-Biruni also records an Adar Jashan festival of fire celebrated on the intersection of Adar day (9th) of Adar month (9th), which is the last autumn month. This was probably the same as the fire festival called Shahrevaragan (Shahrivar day of Shahrivar month), which marked the beginning of winter in Tokarestan. In 1979, journalist Hashem Razi theorized that Mihragan — the day-name festival of Mithra that in pre-Islamic times was celebrated on the autumn equinox and is today still celebrated in the autumn — had in early Islamic times shifted to the winter solstice. Razi based his hypothesis on the fact that some of the poetry of the early Islamic era refers to Mihragan in connection with snow and cold. Razi’s theory has a significant following on the Internet, but while Razi’s documentation has been academically accepted, his adduction has not. Sufism’s Chella, which is a 40-day period of retreat and fasting, is also unrelated to winter solstice festival.

Food plays a central role in the present-day form of the celebrations. In most parts of Iran the extended family come together and enjoy a fine dinner. A wide variety of fruits and sweetmeats specifically prepared or kept for this night are served. Foods common to the celebration include watermelon, pomegranate, nuts, and dried fruit. These items and more are commonly placed on a korsi, which people sit around. In some areas it is custom that forty varieties of edibles should be served during the ceremony of the night of Chelleh.

Light-hearted superstitions run high on the night of Chelleh. These superstitions, however, are primarily associated with consumption. For instance, it is believed that consuming watermelons on the night of Chelleh will ensure the health and well-being of the individual during the months of summer by protecting him from falling victim to excessive heat or disease produced by hot humors. In Khorasan, there is a belief that whoever eats carrots, pears, pomegranates, and green olives will be protected against the harmful bite of insects, especially scorpions. Eating garlic on this night protects one against pains in the joints.

After dinner the older individuals entertain the others by telling them tales and anecdotes . Another favorite and prevalent pastime of the night of Chelleh is divination by the Dīvān of Hafez (fāl-e Hafez). It is believed that one should not divine by the Dīvān of Hafez more than three times, however, or the poet may get angry.

Activities common to the festival include staying up past midnight, conversation, drinking, reading poems out loud, telling stories and jokes, and for some dancing. Prior to invention and prevalence of electricity, decorating and lighting the house and yard with candles was also part of the tradition, but few have continued this tradition. Another tradition is giving dried fruits and nuts to family and friends, wrapped in tulle and tied with ribbon (similar to wedding and shower “party favors”). Prior to ban of alcohol, drinking wine was also part of the celebration. Despite the Islamic alcohol ban in Iran, many continue to include home-made and contraband alcoholic drinks in their celebrations.

Another custom performed in certain parts of Iran on the night of Chelleh involves young engaged couples. The men send an edible arrangement containing seven kinds of fruits and a variety of gifts to their fiancees on this night. In some areas, the girl and her family return the favor by sending gifts back for the young man. 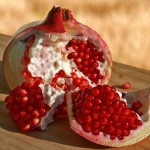 Pomegranate is necessary for Yalda. 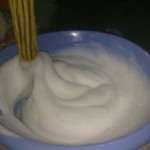 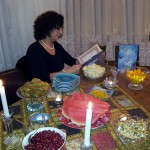