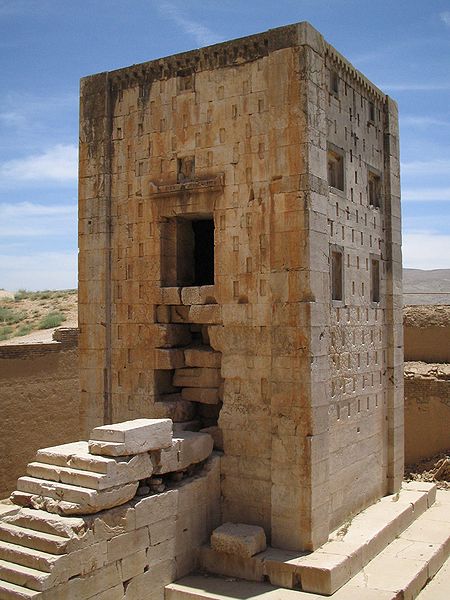 The Ka’ba-ye Zartosht (alt: Kaba-ye Zardusht, Kaba-ye Zardosht, ‎), meaning the “Cube of Zoroaster,” is a 5th century B.C.E. Achaemenid-era tower-like construction at Naqsh-e Rustam, an archaeological site just northwest of Persepolis, Iran. This enigmatic structure is one of many surviving examples of the Achaemenid architectural design.

The name Ka’ba-ye Zartosht probably dates to the 14th century, when many pre-Islamic sites were identified with figures and events of the Qur’ān or the Shāhnāme. The structure is not actually a Zoroastrian shrine, nor are there reports of it ever having been a pilgrimage site.

The square tower is constructed of white limestone blocks, that – unlike those of the sister building – are held in place by iron cramps. Mortar was not used in its construction. Each side of the building is 7.25 m wide. The 12.5 m high structure has a slightly pyramidal roof and stands on a 1.5 m high three-stepped plinth. Each face of the building is decorated with slightly recessed false windows of black limestone.

The structure has one square inner chamber, 5.70 m high and 3.70 m wide, access to which is through a doorway with a decorated lintel in the upper half of the tower. The chamber had once been accessible by a flight of steps, only the lower half of which has survived. The 1.70 m wide and 1.90 m high door was of solid stone that was originally firmly closed but has since disappeared. 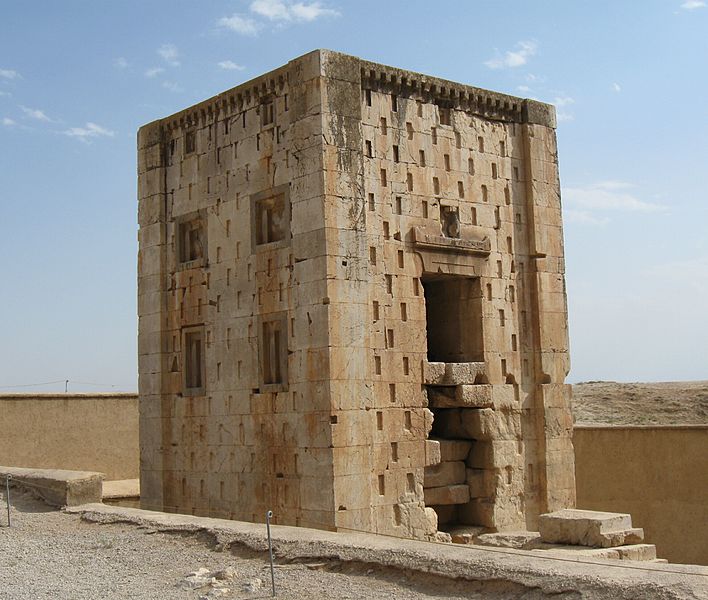 From a reference to fire altars in a Sassanid-era inscription on the building it was inferred that the structure was once a fire altar, or perhaps as an eternal flame memorial to the emperors whose tombs are located a few meters away. This theory has however since been rejected since the lack of cross-ventilation would have soon choked the flame, and in any case, the author of the inscription is unlikely to have known the purpose of the building seven centuries after its construction.

A later opinion suggested that both it and its sister building were safety boxes for the “paraphernalia of rule”.

Today, scholars consider the structure to be an Achaemenid royal tomb, and it has been observed by F. Weissbach and A. Demandt that both the Ka’ba-ye Zartosht and its sister building at Pasargadae “more closely correspond to the description of Cyrus the Great’s tomb by Arrian (6.29) and Strabo (15.3.7) than does the monument in Pasargadae which is commonly attributed to this king. 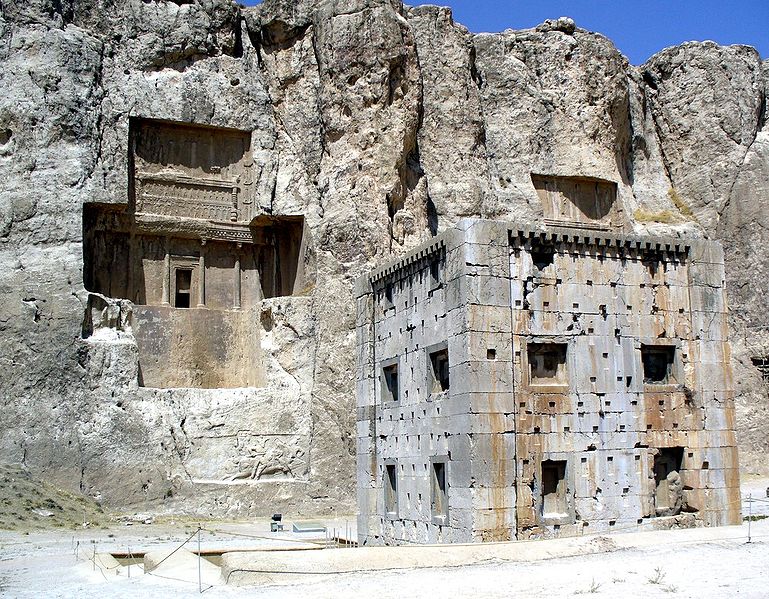 Ka’ba-ye Zartosht (foreground,right) against the backdrop of Naqsh-e Rustam.

The Sassanid-era wall surrounding the structure has four inscriptions dating to the 3rd century.

The trilingual inscription of Shapur I, known as SKZ or KZ or Res Gestae Divi Saporis contains his account of the operation of his reign. It sheds light on the operation of the early Persian kingdom. It also contains a description of Shapur’s Roman Wars which differs significantly from the account in Roman sources. Shapur claims to have defeated and killed the emperor Gordian III at Misikhe, defeated a large Roman force at Barbalissos, and captured the emperor Valerian in a battle between Edessa and Carrhae. Res Gestae Divi Saporis. Roman sources only mention the latter battle and usually imply that Valerian was captured through treachery.