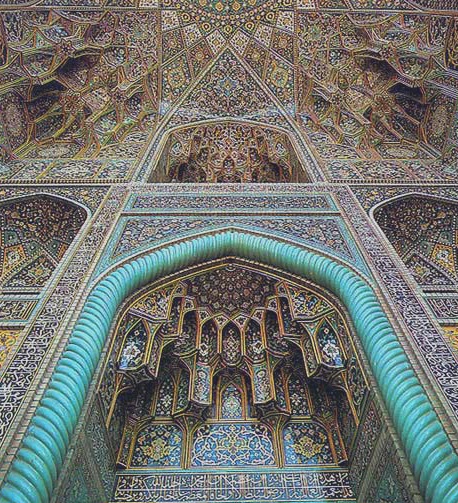 Goharshad Mosque is a former free standing mosque in Mashhad of the Razavi Khorasan Province, Iran, which now serves as one of the prayer halls within the Imam Reza shrine complex.

It was built by the order of Empress Goharshad, the wife of Shah Rukh of the Timurid Dynasty in 1418 CE. The architect of the edifice was Ghavameddin Shirazi, who is responsible for so many of Shah Rukh’s great buildings, with the architectural and decorative manpower supplied from Shiraz and Isfahan.

The mosque underwent some renovations during the Safavid and Qajar eras. It has four iwans and a courtyard measuring 50 m × 55 m (164 ft × 180 ft), as well as several shabestans.

The double layered dome of the mosque was severely damaged in 1911 in bombings by troops of the Russian Empire.

The interior of Goharshad Mosque

The first and the greatest surviving, Persian monument of the fifteenth century is the beautiful mosque of Gawhar Shad (1418) now abutting the shrine of the Imam Reza in Mashhad. Its portal continues the Samarkand style of arch within arch, enriched by a succession of bevels and reveals that give it depth and power. The thick, tower-like minarets, merging with the outer corners of the portal screen, extend to the ground and, together with the high foundation revetment of marble, give the ensemble the impression of solidity necessary to support its exuberant color. The entire court facade is faced with enamel brick and mosaic faience of the finest quality.

The full scale of colors includes a dominant cobalt blue and turquoise, white, a transparent green, yellow, saffron, aubergine and mirrorblack – all tones fluctuating through several shades. The patterns lucid and vigorous, are artfully adapted to their decorative role, whether for eye-panels, or dome ornament meant to be effective at a thousand feet.

Monotony, difficult to avoid in such a large area, and a distracting intricacy that might compete with the essential architectural forms are both forestalled.

This is accomplished by the energy of the faience floral patterns and brick geometrical schemes; by the emphatic rhythm of the arcades, open galleries and deep recesses; and especially by the contrast of the ivans. 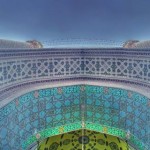 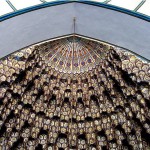 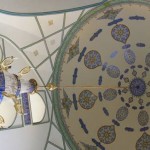 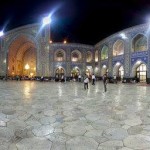 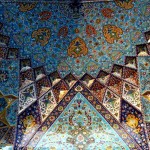 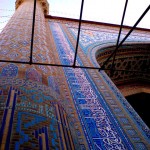 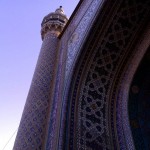 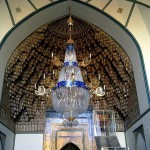 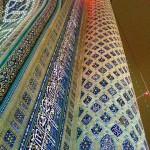 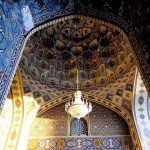 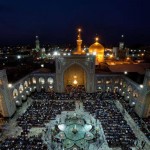 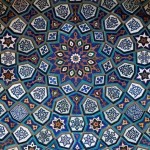 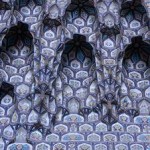 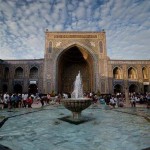 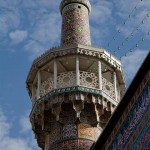 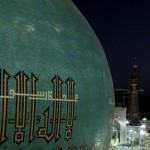 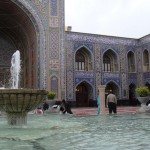 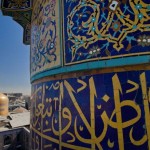 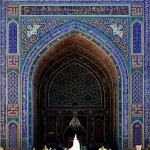 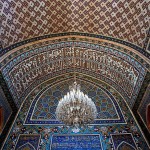 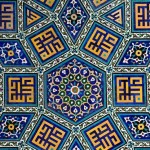 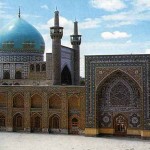 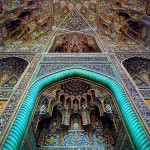 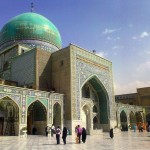 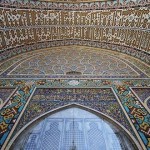 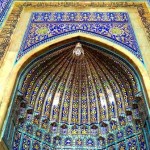