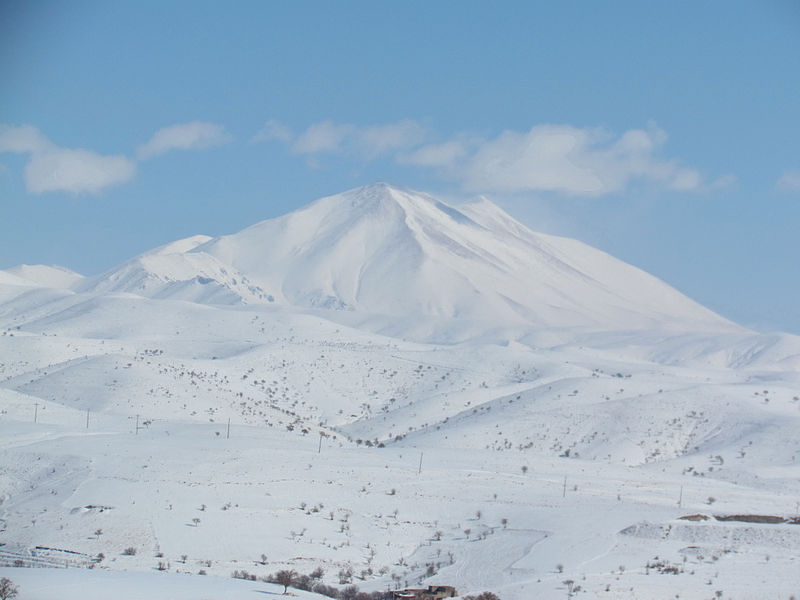 Sahand (Azerbaijani: Səhənd; ), is a massive, heavily eroded stratovolcano in Azerbaijan, northwestern Iran. At 3,707 m (12,162 ft), it is the highest mountain in the province of East Azarbaijan.

It is one of the highest mountains in Iranian Azerbaijan, in addition to being an important dormant volcano in the country. The Sahand mountains are directly south of Tabriz, the highest peak of which is Kamal at an elevation of 3,707 m.. Approximately 17 peaks can be accounted for as being over 3,000 m. in height. Due to the presence of a variety of flora and fauna, the Sahand mountains are known as the bride of mountains in Iran.

The absolute dating of Sahand rocks indicates that this volcano has been sporadically active from 12 million years ago up to almost 0.14 million years ago. Sahand is made chiefly of dacite and associated felsic rocks.

On the north foot of the mountain and near the city of Tabriz, a winter sport’s complex has been built. This complex, also known as the Sahand Skiing Stadium, greets visitors with a variety of sports including, skiing and snowboarding. The snow statue competition, which runs once a year at mid-winter in the stadium is a famous and amusing event, which attracts spectators and competitors from all over the country.