The Kārun (also spelled as Karoun)  is Iran’s most effluent and only navigable river. It is 450 miles (720 km) long. It rises in the Zard Kuh mountains of the Bakhtiari district in the Zagros Range, receiving many tributaries, such as the Dez and the Kuhrang, before passing through the capital of the Khuzestan Province of Iran, the city of Ahvaz.

The Karun continues toward the Persian Gulf, forking into two primary branches on its delta – the Bahmanshir and the Haffar – that join the Arvand Rud ( Shatt al-Arab ), emptying into the Persian Gulf. The important Island of Abadan is located between these two branches of the Karun. The port city of Khorramshahr is divided from the Island of Abadan by the Haffar branch.

Juris Zarins and other scholars have identified the Karun as one of the four rivers of Eden, the others being the Tigris, the Euphrates and either the Wadi Batin or the Karkheh.

In early classical times, the Karun was known as the Pasitigris. The modern medieval and modern name, Karun, is a corruption of the name Kuhrang, which is still maintained by one of the two primary tributaries of the Karun.

It originates in the Zagros Mountains of western Iran, on the slopes of 14,921-foot (4,548 m) Zard-Kuh. The river flows south and west through several prominent mountain ridges, and receives additional water from the Vanak on the south bank and the Bazuft on the north. These tributaries add to the catchment of the river above the Karun-4 Dam. 25 kilometres (16 mi) downstream, the Karun widens into the reservoir formed by the Karun-3 Dam.

The Khersan flows into an arm of the reservoir from the southeast. The river passes through this reservoir and flows through a narrow canyon, now in a northwest direction, past Izeh, eventually winding into the Sussan Plain. The Karun then turns north into the reservoir of Shahid Abbaspour Dam (Karun-1), which floods the river’s defile to the southwest. The Karun flows southwest into the impoundment of Masjed Soleyman Dam (Karun-2), then turns northwest. Finally, it leaves the foothills and flows south past Shushtar and its confluence with the Dez. It then bends southwest, bisecting the city of Ahvaz, and south through farmland to its mouth on the Aravand river (Shatt Al-Arab ) at Khorramshahr, where its water, together with that of the Tigris and Euphrates, turns sharply southeast to flow to the Persian Gulf.

The largest river by discharge in Iran, the Karun River’s watershed covers 65,230 square kilometres (25,190 sq mi) in parts of two Iranian provinces. The river is around 950 kilometres (590 mi) long and has an average discharge of 575 cubic metres per second (20,300 cu ft/s). The largest city on the river is Ahvaz, with over 1.3 million inhabitants. Other important cities include Shushtar, Khorramshahr (a port), Masjed-Soleyman, and Izeh.

Much of Khuzestan’s transport and resources are connected in one way or another to the Karun. Since the British first discovered oil at Masjed-Soleyman, the Karun has been an important route for the transport of petroleum to the Persian Gulf, and remains an important commercial waterway. Water from the Karun provides irrigation to over 280,000 hectares (690,000 acres) of the surrounding plain and a further 100,000 hectares (250,000 acres) are planned to receive water. 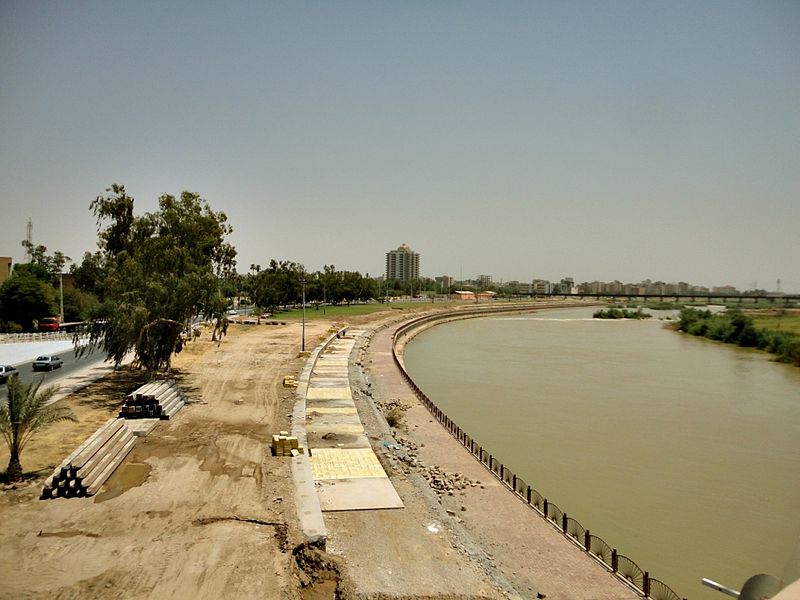 The Karun River valley was once inhabited by the Elamite civilization which rose about 2,700 B.C. At several points in history, Mesopotamian civilizations such as Ur and Babylon overthrew the Elamites and gained control of the Karun and its surroundings in modern Khuzestan. However, the Elamite empire lasted until about 640 B.C., when the Assyrians overran it. The city of Susa, near the modern city of Shush between the Dez and Karkheh rivers, was one of their largest before it was destroyed by the invaders. 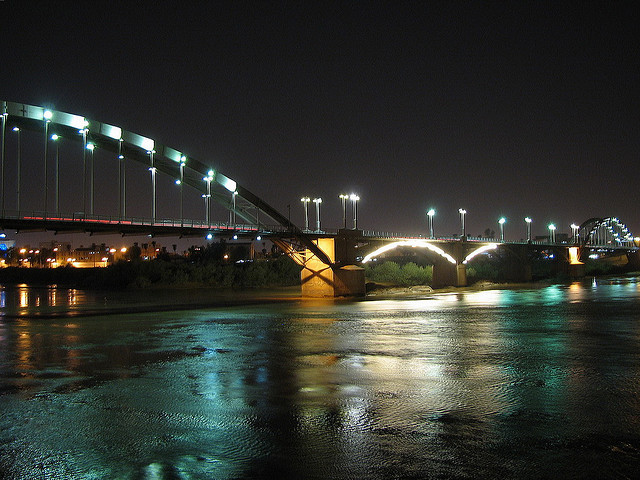 Karun in the night

The first known major bridge across the river was built by the Roman captives that included its emperor Valerian, whence the name of the bridge and dam Band-e Kaisar, “Caesar’s dam”, at Shushtar (3rd century AD).

In two of several competing theories about the origins and location of the Garden of Eden, the Karun is presumed to be the Gihon River that is described in the Biblical book of Genesis. The strongest of these theories, propounded by archaeologist Juris Zarins, places the Garden of Eden at the northern tip of the Persian Gulf, fed by the four rivers Tigris, Euphrates, Gihon (Karun) and Pishon (Wadi Al-Batin).

The name of the river is derived from the mountain peak, Kuhrang, that serves as its source. The famous silent film documentary, Grass: A Nation’s Battle for Life (1925), tells the story of the Bakhtiari tribe crossing this river with 50,000 people and 500,000 animals.

In September 2009, three districts of Basra province in southern Iraq were declared disaster areas as a result of Iran’s construction of new dams on the Karun. The new dams resulted in high levels of salinity in the Arvand river , which destroyed farm areas and threatened livestock. Civilians in the area were forced to evacuate. 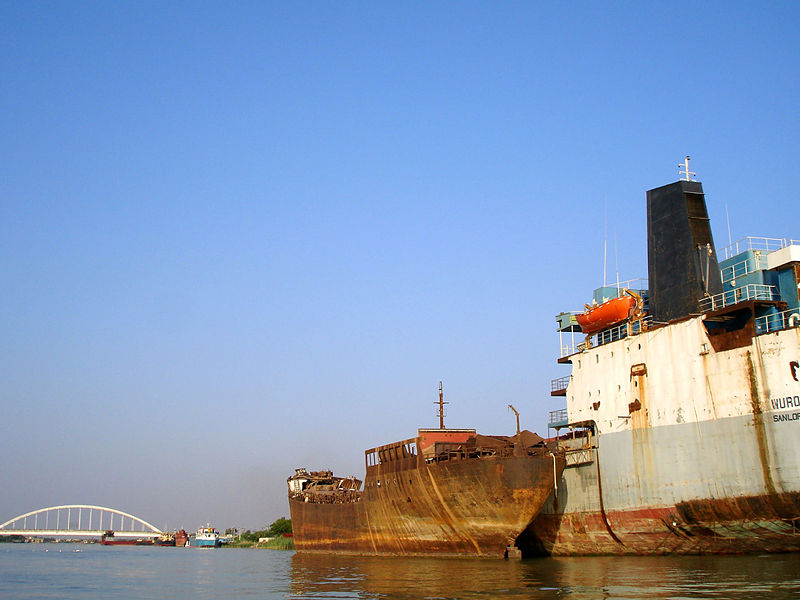 Derelict vessels and a bridge over the Karun in Khorramshahr.

There are a number of dams on the Karun River, mainly built to generate hydroelectric power and provide flood control. Gotvand Dam, Masjed Soleyman Dam, Karun-1 (Shahid Abbaspour Dam), Karun-3, and Karun-4, most of them owned by the Iran Water and Power Resources Development Co., are all on the main stem. Karun-2 would potentially be located in the Sussan Plain between Shahid Abbaspour and Karun-3, but the project is still under consideration because of fear of submerging archaeological sites.

A Karun-5 dam upstream of Karun-4 has also been proposed. The Masjed Soleyman, Shahid Abbaspour, and Karun-3 dams each generate 1,000-2,000 MW of power to service the peaking power sector of Iran’s electricity grid, and when completed, Karun-4 will also generate 1,000 MW. There are also many dams on the river’s tributaries. Dez Dam, Bakhtiari Dam (under construction) and Khersan-3 Dam (under construction) are among them. Khersan 1, Khersan 2, Zalaki, Liro, Roudbar Lorestan, Bazoft, and others are proposed. The dams on the Karun have had a significant effect on the sediment transport and the ecology of the river, and have required the relocation of thousands of residents. 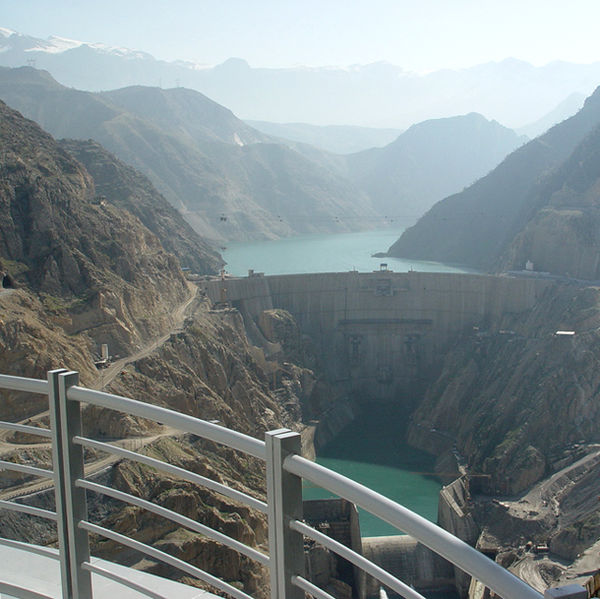 The Karun-3 dam, one of the many large power dams on the Karun River