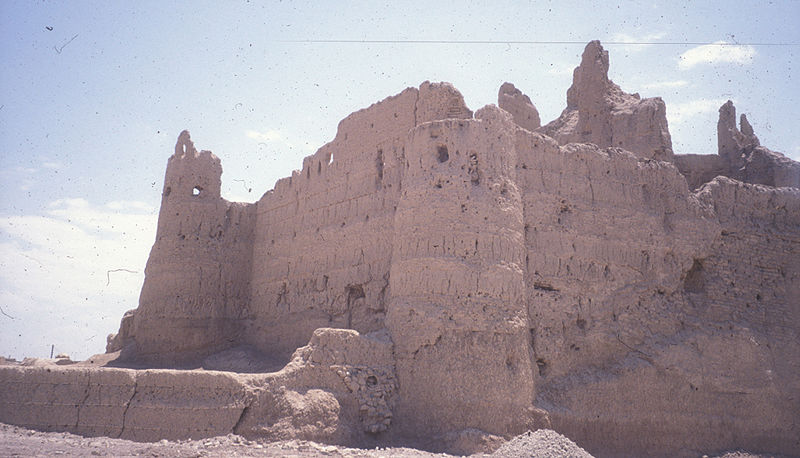 The Narin Qal’eh  or Narin Castle is a mud-brick fort or castle in the town of Meybod, Iran. Structures like these constituted the government stronghold in some of the older (pre-Islamic) towns of central Iran. Some of these castles incorporate mud bricks of the Medes period and of the Achaemenid and Sassanid dynasties.

The ruins of the structure stands 40 meters (130 ft) high from its base. Although built some 2,000 years ago, it contains what seems to be a type of plumbing system made out of mortar (“sārooj”) built into its massive walls. It is also peculiarly similar in design to Ali Qapu palace of Isfahan; it has a terrace high on top of the structure whose circulation is provided by two helical stairwells (whose walls have caved in, making it inaccessible). The structure also has a large underground chamber (filled now by rubble), possibly a prison. Four towers surround the entire compound, and a large gate furnishes access to a large courtyard. The structure seems to have been the victim of numerous earthquakes throughout the ages.

Some believe that the Narin castles are descendants of ancient fire-temples; some of the castles in Narin and Meybod, in Yazd province, are also called nareng castles (orange castles), possibly by folk etymology. The castle at Meybod is currently under study. Yet this castle has not been faring very well.

Unfortunately today, the ruins of Narin Gahl’eh is nothing more but the site of a local garbage dump, and what is even more depressing is that Iran contains thousands of such structures, decaying in their own rubble. 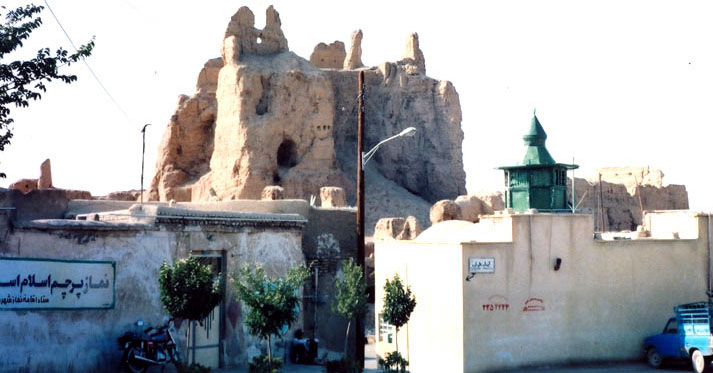 Seen in the background (in order to capture its full size), the ruins of Narin Ghal’eh are not even registered with Iran’s Heritage Organization, and is currently used as a garbage dump for the locals.

Although there are some bricks from Medes period, there are rumors that this castle was built around 7000 years ago, this building ( city) unlike all other buildings ( for exp.: Susa) has built as an old city in 3 different floors, at ground level you will see common people life form, then commercial and business part and then royal part (except the military part on the roof for patrolling and watching far distances in case of military invasion. ( No religious floor or section at all!)

The position of this city is unlike all others as you can watch over 70 kilometers in every direction from the top of the roof,yet again it is centered between mountains so for an invasion you had to climb those mountains first then go another 70 kilometers and only after that you had to prepare yourself for all other normal events when you wanted to invade a castle (like rivers of water and burning oil, etc.)

Although all outer gates have been destroyed the inner castle still exists. You can still see some of the outer walls.

The ruins of the structure stand 40 meters tall from base to tip.